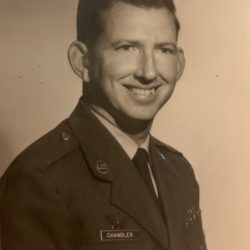 On January 14, 2020 William Derrell Chandler, “Mr. Bill,” received his wings and went home to be with the Lord. He was 85 at the time of his death. He passed away at Haven Hospice in Lake City, FL, where he lived the last 40 years with his wife Carmoleta Chandler.
Mr. Bill was born in Winnfield, La, to J.Harmon and Bertha Chandler on April 25, 1934. He attended LSU and joined the National Guard. He then spent 26 years serving his country in the U.S. Air Force. After retiring from the Air Force he moved to Lake City, FL, where he worked at Aero for 20 years. After retiring from Aero he enjoyed being an active member of his church. He became a Deacon at Watertown Congregational Methodist Church, Lake City, FL, in 2011. He loved to hunt, fish and sometimes just watch the deer. He loved all sports and could often be found watching sports in his chair, with his eyes closed!
Mr. Bill and his wife Carmoleta married on April 25, 1963 in Warner Robins, Ga. They have five children, Grace Knebel (Jim), Delores Eglsedar, Jeannette Grimmer (Bob), Richard Unwin (Tammy), Jerry Chandler (Donna). They have 11 grandchildren and 11 great grandchildren. He leaves behind also his brother James Chandler and sister Elizabeth Mcquiddy. Mr. Bill was preceded in death by his parents and brother Marshall Chandler.
A memorial service will be held on January 25, 2020 at Watertown Congregational Methodist Church at 10:30am – 11:30am. In leu of flowers please donate in Mr. Bills name Watertown Congregational Methodist Church or Haven Hospice in Lake City, FL.
He will be loved and missed by all who knew him.
“To God be the Glory” & “May God tuck us all under His loving wings.” – Mr. Bill
Arrangements have been entrusted to ICS CREMATION & FUNERAL HOME www.icsfuneralservices.com