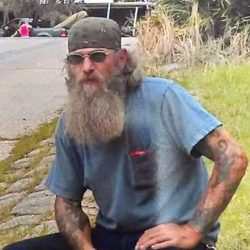 Michael S. Rentsch 49, of Lake City passed away suddenly on April 10, 2019 doing the one thing he loved as much as family; riding his beloved Harley. He is survived by his loving and devoted wife of 20 years, Dianna Lynn (Richards) Rentsch, children; Randy Potts (Rachael), Jerry Rentsch, Michael “ Tarzan” Rentsch II, and Samantha “ S.T.A.R” Rentsch, niece Jasmine “Buttercup” Parents; Rodney and Connie Rentsch, siblings; Brian Rentsch (Michelle) and Jeffrey Rentsch (Kris),brother in law Rodney Richards (Jamie), mother in law Linda Sebald (Larry), and many extended family and friends. Michael was born in Ohio and came to FL in July 2006. He was a welder by trade and worked for Grizzlies since August of 2018. He was the patriarch of the family and always enjoyed spending time with his children. Michael taught his children to enjoy every moment of life. He was passionate about motorcycles. Michael loved the solace of the ride, the wind and sun in his hair. and football. Michael also enjoyed the quiet times; with his nature walks, hunting, fishing, coloring with his daughter, or cuddling on the couch with some popcorn. Michael will be remembered for his determined spirit, quick wit, and unconditional love for family and friends. We have all lost a brother, be assured his is riding the golden roads in Heaven while thundering his pipes.
A Celebration of Life Service is to be held on April 20, 2019 at 7:00 pm at 492 SE Montrose Ave., Lake City, FL 32025. In lieu of flowers, donations be made to Wounded Warrior Project.