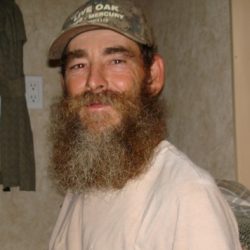 After a lengthy illness Michael Barry Britton Sr., 66 of Branford, FL passed away in the middle of the night on June 21, 2021. Michael was born on September 11, 1954, in Orlando, FL to Virgil Britton and Evylin (Mullins) Britton who have both proceeded him in death. He meet the love of his life when she was still a teenager riding on the back of a horse on Cleburne Street near his parent’s house….. Many years later after the Navy, they found each other again. It took several years, a haircut removing long ringlet and a beard down to his waist and eight months to charm her into marrying him in November 1982. Eight weeks later his oldest child was born. He named her after his sister who had passed the previous summer. Two years later he had a second daughter the apple of his eye. Then in 1988, he had his son, who looks exactly like him and just as funny. (Some of the humor is his contribution….)

Michael was the third born child of Virgil and Evylin Britton, with dark black hair and brown eyes. He “helped” build the old house on Cleburne Rd. He always said Grandpa nailed his diaper down on the roof and handed him a hammer while they worked to keep him close when Grandma went to the store or work. From the start, he was into everything. That proved to be an asset later in life. As brothers do he made his sisters cry on occasion, and was the inspiration for wild schemes with his brothers. The boys sneaking the live gator in the house to show their younger sisters without getting caught……. Michael served in the Navy on aircraft carriers. while he never became a pilot he was in the middle of the well-choreographed ballet of the flight deck. Michael was given a general discharge from the Navy in 1978, after taking an unscheduled vacation with the navy’s unofficial approval….. “Thank God Grandma Britton kept his uniform.” He labored at several things before finding a career in concrete. He was employed with Rinker for many years until deciding to pursue his own business Mike Britton’s Misc. Concrete from 1998 thru 2008 pouring house foundations, sidewalks, and driveways. Mike expanded the business to North Florida in 2006 completing side jobs and helping to work on an energy-efficient green home in Gainesville, FL. Michael was well known as a hard worker and fair businessman. Michael sometimes was a tenacious, hard man, and could creatively cuss never using the same phrase more than once in fifteen minutes. However, he inspired others to do better. Bring him a problem and he would move mountains to make it go away.

We knew our father always as a complex man. He was a man of unshakable conviction. He was a man of integrity believing that you kept your word. All animals on this planet approved of him without reservation, but most especially all the dogs and goats he ever had occasion to meet. Children were fascinated with him and he had infinite patience with little ones. He hated laziness, loathed the word “can’t”. He was never politically correct and excepted the title “Redneck”. He never claimed to be perfect and his choices were always an adventure. His way of living told the tale of a life of freedom and hard work made easier by clever thinking. Of course, We, as his children, didn’t know him his entire life, but we heard the stories about what he, his friends, and brothers got up to. You know the ones…. let’s just say Union Park and Orange County survived the Britton boys growing up. We learned plenty of life lessons from those tales: home-made airplanes do not fly without a motor, always make sure you put your cigarettes out completely before climbing on the school bus, you can’t hide anything from a parent, don’t make the Judge smile, Owls make good pets when you live in a city apartment…….. Also, you can live a life full of luck. Growing up he taught us defensive driving in the bronco on the dirt roads behind Westgate Resort and cooked the best-smoked pineapple hams. He created his son the best wooden shotgun for his terminator costume. In his last thirteen years he spent doing whatsoever he wanted and as he liked. And he left too many unfinished projects….. and words unsaid.

He was fearless and was not a man to be crossed. He drank coffee with the horses, grew a garden that fed the deer, and sang to the goats. He loved to watch the wildlife that came to visit his yard and loved the hummingbirds and deer most of all. He liked to listen to the wind chimes on the porch when he became bed bound. During his last months, he reminisced and dreamed old and new dreams telling his brothers, sisters, nieces, nephews, cousins and friends that he loved them. He wished he could have seen all of you. No matter what happened in the past he forgave and sought forgiveness and wanted us to make sure each one of you knew that he loved you and hoped you prospered. Michael loved old science fiction books, movies, and tv shows, westerns that included tv shows, movies and books, humor, rock n roll, fishing, old classic trucks and cars, and tinkering and designing things. He could fix or build anything. Seriously anything. We think most of it was duct tape, sweat, and chewing gum…….Most of all he loved life. He encouraged his children to pursue their dreams. He had high hopes they all will stop being so independently single….. Well, two have found what may be long-term partners. However one is too stubborn and independent….. I blame it on that time Dad put the rebel ball cap on me and let me take a sip of Budweiser … the picture exists. Dad was never one for flaunting or professing approval for organized religion. However, he did believe in God and in the hope of Heaven. Now he has gone to shake up Heaven with a new youthful vigor……

Michael is survived by his wife, Dawn Marie Britton (the love of his life); his children, Linda M. Britton, Michael B. Britton II, and Lois E. Britton. He has left decades of colorful memories for his siblings Freda McNamee, Amanda Massie, and Virgil Britton Jr; brother-in-laws Alex McNamee, Terry Massie; In-laws Cheryl Spencer, Lois Seabright, Delbert Spencer, and Teresa Spencer. A multitude of cousins, nieces, and nephews with the hope that they each prosper. Also, many good friends who were like family Barry and Barabra Winfree….. The family is forever in debt to his neighbors, Gary, Pricilla, Betty, and Kenneth for all of their help in recent years. His dog, Sara still lays on the porch waiting…… and your children will keep their vows…… Dad you will be missed…

Per Dad’s wishes, he will be cremated, set up by the jukebox with plenty of music, a prayer just because, words or tales from his family and friends, and lift a drink in his memory (non-alcoholic if joining in on the Celebration of Life in person), then spread his ashes at sea.

We invite his friends and loved ones to join his family to celebrate his life. We’ll share our favorite stories, say a few words, set Dad up next to the jukebox, play some of his favorite music and raise a glass of non-alcoholic beverages in his honor. Per his request CELEBRATE HIS PASSING!!! Also, due to vows made the family requests that grievances and past hurts remain in the past.

A meal of of smoked chicken, baked potato, beans, roll and a dessert will be shared. A live link will be created to have a video feed so that everyone may share in the event. The Memorial Page has been set up and other information will be passed on there.
Arrangements trusted to ICS CREMATION & FUNERAL HOME, 357 NW Wilks Lane, Lake City, FL 32055.